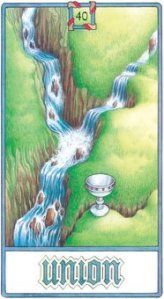 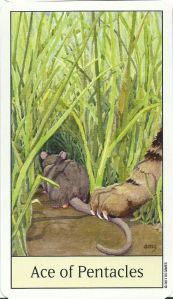 Well this week’s energy is likely to be dominated, in current events, by choices made over the weekend, especially in Europe and to a lesser degree in the United States and any other area with the word Union (or United) in its current (or former) name; That’s because we have the Union (lovers) Card as our first card, followed by the Ace of Pentacles.  The Ace of Kitty Pentacles is an experienced hunting cat, biding its time and catching a mouse in a tried and true fashion; this card usually suggests that prosperity and improved conditions are possible but that this is not the new time for untried or unusual ventures.  The Hagalaz (Hail) rune, suggests a sudden “strike” or upset, something that seems to come out of nowhere and hits with glass-breaking force.

To some degree, I think this reading has partly already come to pass, I was unable to read last week due to personal circumstances, but one look at today’s headlines in Europe shows that in the European “Unions” the huge number of MP’s elected on more conservative and even anti-EU platforms has thrown a rock the size of a giant hail-stone into the European political mix and no one quite knows yet how it is going to affect prosperity or current ways of managing things.  One thing is certain, voters throughout the EU told the central HQ that they are sick and tire of “austerity” and forced plans to merge the European Countries into one, vast, super-state.  It remains to be seen if this vote will actually have any long-term effects on the actual situation on the ground, but this must be causing headaches in the vaunted and decorated halls of Brussels and Berlin.

This energy is also playing out in the Ukraine/Russia/Union area, again having had an “election” on Sunday followed by a further intensification of the civil war this morning, suggests that the “union” of the Ukraine itself and or the “Union” of Eastern Ukraine back with Mother Russia (aka former Soviet Union) is likely to be a big player this weeks news as well.

The United States is also likely to see continuing tensions between conservative ideas (especially in economics) and the difficulty it is having in reaching a national unity on anything – again, something may come out of nowhere that changes this (or other US situations) very suddenly.

Of course, we also need to step back and look at the energies as a whole, there will be energies moving people both towards and away from unions, marriages, relationships, understandings etc – and the Ace of Pentacles card suggests that such personal (and governmental/corporate) decisions are best made in more traditional and time-tested fashions.  This is NOT the week for reaching out and trying new ideas, but rather one where the going with solutions that are known to work is probably the best way forward when ever possible.

On the other hand, that Hagalaz rune might very well upset and smash into situations that seem to be going along rather smoothly and in a predictable order and force a complete re-think or change of direction, no matter what the original intention or situation may have been.

This is one of those weeks to expect the unexpected news that comes like a bolt out of the blue and hits hard both on personal and international relationships and circumstances; the best way forward is to be cautious and keep your eyes open for sudden changes.

For individuals a good day (and week) to take refuge in personal relationships like family, rely on calm budgeting and wise choices when making plans and being ready to change them if suddenly circumstances change, because it is highly likely that they will.